Spotlight: Michael Schwalbe and What He Said Voiceovers, LLC

Today we wanted to shine a spotlight on Michael Schwalbe and What He Said Voiceovers, LLC. Michael Schwalbe is a veteran voice actor and director, with more than 10 years of experience bringing hundreds of his clients’ projects to life. You’ve almost certainly heard his voice without realizing it, in titles like Half Life: Alyx, Slay the Spire, Ori and the Will of the Wisps, Mafia: Definitive Edition, SMITE, Genshin Impact, Devil May Cry 5, Bugsnax, and many, many more. He’s often referred to as a “vocal chameleon,” performing 60+ roles for a single game on more than one occasion. 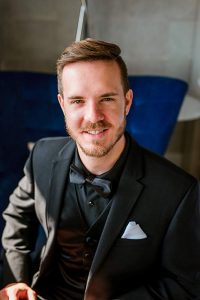 After repeatedly seeing his indie clients struggling to source enough voice talent for their games, Michael started What He Said Voiceovers, LLC, offering full-service voice casting, session direction, and project management. He maintains a curated, vetted, and diverse roster of over 350 professional voice actors, all with competitive studios available. Michael writes, “After seeing my friends in game audio being asked to handle composition and sound design for a title, while also being expected to somehow find the time to sift through hundreds of auditions, direct dozens of recording sessions and actor invoices, I just figured I could make their lives a lot easier. Turns out, I was right!”

Michael got his start as an aspiring professional singer 15 years ago, performing music as diverse as Victorian caroling quartets, blues/swing acappella groups, to his progressive metal band Invicta. But working in the music business at Warner Music Nashville showed him just how little money there was in music around 2008-2010. “And after WMG asked me to voice Blake Shelton’s CMA campaign, I figured God was telling me if my voice was good enough for Blake, I was good enough for anyone! That led to corporate stuff, then commercials, and finally games.”

Now, he is passionate about making AAA-quality voice work available to any developer, and firmly states, “Nothing is more distracting or ruins immersion in a game faster than bad voice work. And it’s so easy to get right! There’s just no excuse for getting it wrong in today’s world.”

We at the IGDA are also pleased to have Michael as the announcer for our upcoming Global Industry Game Awards. Michael noted that he is honored to be announcing the ceremony, and offers his sincerest congratulations to all the  talented nominees and winners. When asked about his support of the IGDA, Michael says, “Because I find myself so often working with small to mid-size indie studios, it just makes sense to be a part of the organization doing the most to support game developers like them. Plus, indies still think voice actors are cool. Who doesn’t like feeling cool?”

When he’s not recording death gurgles or telling an actor what their motivation is, Michael enjoys tending bar as an amateur mixologist, collecting and obsessing over cool antiques and minerals, and writing- and he still loves to sing.

To contact him about your project’s needs, or just to say hello, head to https://michaelschwal.be or drop him a line on Twitter at @WhatHeSaidVO.

30 Jun 2022
First post-ish pandemic in person get together was a success!

Hey everyone, After consulting our local members, we decided...

Authored by: AppMagic A deep dive into the Idle...