Through the Eyes of Many – Student Developer Spotlight

Today we would like to highlight two students who submitted an outstanding project for the Game Design Challenge that the IGDA hosted earlier this year in partnership with Legends of Learning.

Together they created Through the Eyes of Many, a story-based game that follows three individuals through their difficult choices which impact the environmental changes of the world. A building sense of horror and dread around the impacts of environmental degradation captured the theme of “Advancing Sustainability” extremely well. 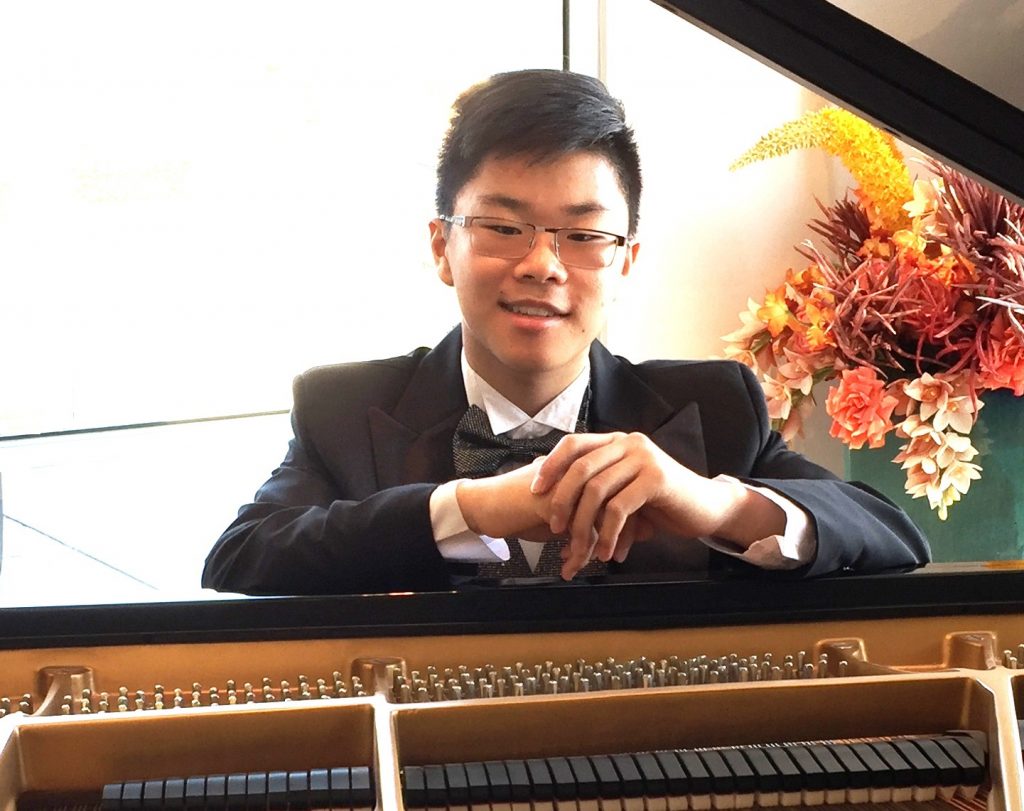 Goals/Dreams: Vincent Yang aspires to research new platforms of technology in the future to develop a better work, study, and gaming experience for the public. This new approach is evident in this recent game made for promoting environmentalism with his partner Kaitlyn. The month he worked on this project with his friend also gave him new insights about future goals of working on immersed virtual reality, micro-robotics, or more socially realistic human-machine interactions.

Aspect Worked On: In the game, Yang was in charge of the coding and the music composition for a vertical slice of the game Through the Eyes of Many. The game is a story-mode choose your adventure framework with a total of three scenes and two possible endings. Although stressful, he believed it provided a new experience which gave him an expanded perspective in the world of coding and composition making. 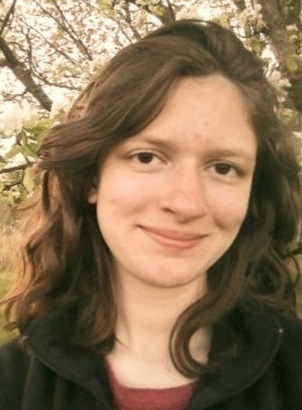 Goals/Dreams: Kaitlyn Goretski, while focusing on environmental engineering as her major, strives to participate in the game development community as a game writer and/or artist. This is evident in the game, “Through the Eyes of Many” that she and her partner Vincent developed.

Aspect Worked On: Kaitlyn created the graphics for the portion of the game the two brought to completion, as well as the storyline for the rest of the game (the overall plot was formed with input from both). Having created stories and plotlines for enjoyment many times before, being able to fully flesh one out as a physical portion of a game was a rewarding experience for her. Kaitlyn wrote the extended storyline beyond the developed portion of the game during the final few days before submission. Being pushed to work on the storyline and bring it to completion increased her love of storytelling and world-building, and encouraged her to look into careers as a game writer/artist in the future. In addition to the storyline, forming a unique art-style for the game let her grow in experience as both a digital artist and an animator.

Game Comments (from both Vincent and Kaitlyn): The game begins with Danielle, in her room with a radio giving a blackout warning. Located in a hypothetical future where nuclear reactors have a large influence on our energy source, the story takes place as a nuclear melt down is occurring. In this first scene, Danielle collects precious items which can be mentioned in the second scene; The camera placement provides a different taste to this scene as well as the limited amount of battery (or gas in the secondary power generator) for the lights the player has. Objects cannot be picked up if the light is not on and keeping a light on while being in a different room can quickly drain your limited power source.

The musical composition was inspired by an expository feeling, a deep bass overlapping with vocals that pan in volume to produce a muffled/ mysterious effect. The pattern is set to an alternation of the deep bass with a focus of the panning of the volume. 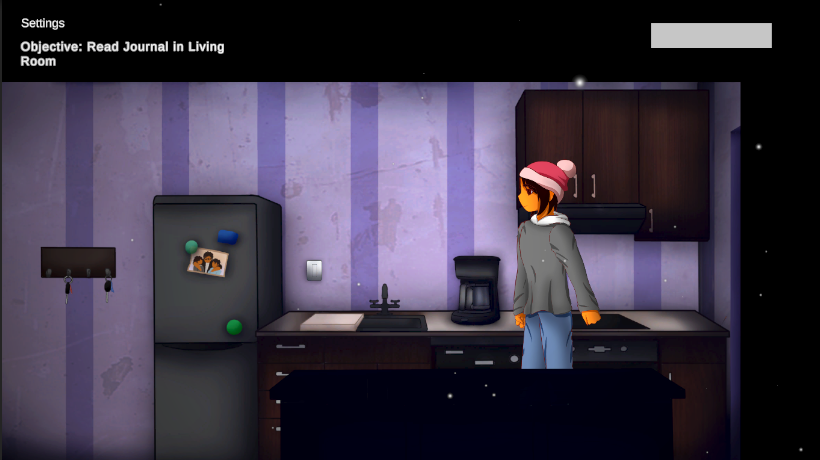 The character design for Danielle was simple, with hopes of drawing more attention to the level itself and the setting of the hypothetical, environmentally injured future (as is more evident in the second and third scenes). Danielle, as well as her brother and uncle, are latinx, with the other characters in the storyline being African and Asian to create a more diverse game that lined up with the settings.

The level design was semi-realistic, with coloration and shading to give it a distinct appearance and fit each scene. For example in the first scene, the furniture in the house, and the house itself, was all shaded and tinted with a similar darkened blue to give a more ominous atmosphere. 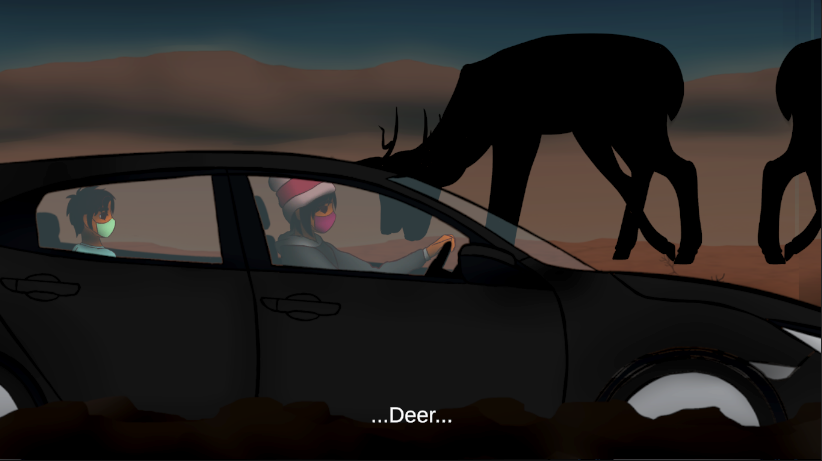 In the second scene items from the previous scene could be brought up in a conversation with the little brother Danielle has; The conversation is tracked by a meter which increases a certain amount when certain responses are chosen, thus that is what decides which ending will be shown.

As the music is more peaceful in this section, again mostly playing by ear, Yang was largely influenced by both the selection of the music box as the main instrument, and the overall context of the first scene transitioning to the second- in other words transition from the more exposition and deep to a lighter feel in preparation- or a break- for the final scene to come.

The graphics in this scene were much different from those in the first, being outside the house and having a mountainous horizon. The environmental downfall of the area is evidenced by the clouded air and view, the relatively barren landscape, etc. This portion of the game graphics was the most enjoyable for Kaitlyn to create, with the less-realistic and more stylistic mountains and background creation.

Last but not least in the final scene, both endings are similar situations, but the point of view is altered between Danielle and her brother. The music takes a climax in this one minute scene, with a fast piano melody and SFX echoing in the background. With this scene being more grim and representing an explosion/crash, the entire level is tinted in a red-orange glow to add depth. The crashed vehicles bear a similar semi-realism style as the furniture in the house in the first scene, with more stylistic coloration and shading. 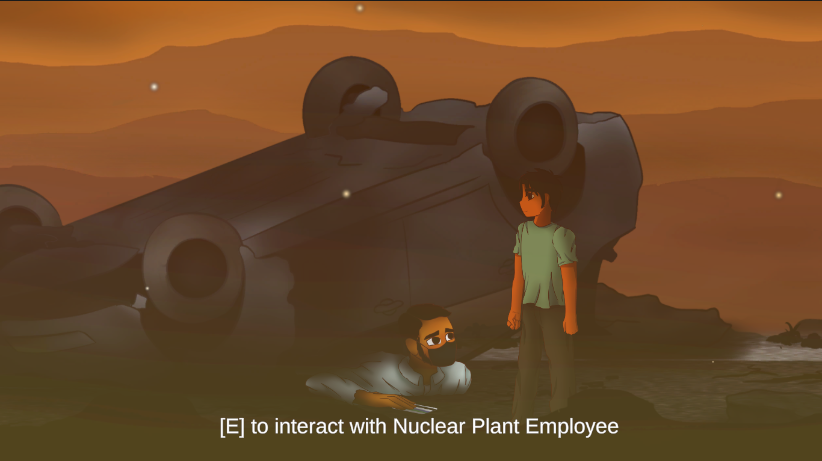