One of the events we were excited to do this year was New Mexico Game Jam. However, due to the event being canceled, this was made more difficult to organize. Our Co-Chair Mike Brown formulated his own internal jam for our students.

We announced on our Facebook page that it would take place at the DACC East Mesa campus from October 22 to the 23rd. Due to pandemic restrictions, we had only 24 hours (half the length of an average game jam.) Eighteen participants joined noon that Friday to hear the theme of IGDA Doña Ana’s first game jam — ‘Decay.’

Then, it was a brainstorming session for the best concept. The trick isn’t to be the loudest or have the craziest ideas because, in the end, it has to be possible to make in just a day. After much deliberation, the winner was chosen: a game where you play as a fire extinguisher who fights off COVID-19 viruses by spraying them with hand sanitizer. An interesting concept for sure, but after that came the real work of making it a reality. The next 24 hours were full of stress, tears, elbow grease, laughing, and snacking. By the five o’clock deadline Saturday, the game, titled “Rona Ranger,” was submitted without a second to spare.

It includes three different levels and a Story Mode with some comic-book-style panels and music. There’s also an explorable credits section with a 3D scanned model of the jammers!

Thanks to all who showed up and made this a jam to remember! 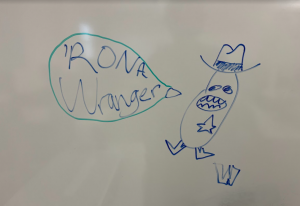